On September 20th, we attended the dedication ceremony for Baker Hall. I’m not quite sure what I had envisioned – or maybe it was that I hadn’t envisioned it at all, having been so caught up in preparing for the day - but it turned out that the evening was far more inspiring than I could have anticipated.

As pointed out by Yale University President Peter Salovey, what I (and so many others) felt was a deep sense of gratitude. Gratitude toward each and every person who played a part in the creation of this special place, and gratitude to have been included in that incredible group. 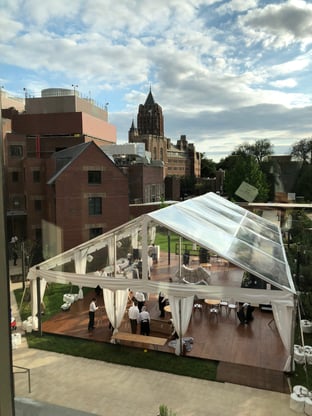 The weather was perfect. A clear tent with a wood floor had been constructed in the courtyard and was set up with lecture-style seating for the speaking portion of the event.

Dean Heather Gerken and Professor (former Dean) Robert Post couldn’t have expressed their thanks more eloquently to the donors, the Law School working group, and the design and construction team, pointing people out by name and noting their unique contribution to the project’s success. Robert Post remarked “You are about now to tour a building that is far more sophisticated and beautiful than any we could have initially imagined. And that is entirely, and I mean entirely, the responsibility of the remarkable Laura Pirie and her talented team.” I speak for all of us at Pirie Associates, when I say that this is not true. While we graciously accept the recognition, we must acknowledge with equal appreciation the collaboration we shared with the Law School. It takes listening and trust between client and design team to create a truly successful project, and working with the Law School was an absolute joy. 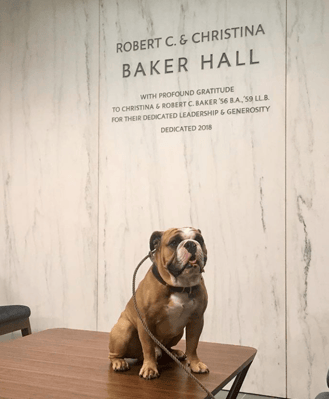 Following the speakers, to overwhelming applause, Mr. and Mrs. Baker used a giant pair of scissors to cut the ribbon. Then, everyone gathered in groups to tour the building. Members of the design and construction team were located throughout the building to talk about key aspects of what went into making this new home for the Law School. I was located in the Lobby, where I got to explain what a difference it made in the building to expand the lobby footprint and reproportion the façade. Paul and Charles talked to the groups about the courtyard and the gate design. Monica walked people through the apartment renovations, explaining how lighting and natural materials transformed the units. Melissa spoke in the Student Center about how we brought health and wellbeing benefits to the building.

Bryan D’Orlando from Yale Facilities spoke about the classrooms and workrooms, and Chris Paradis from AZ Corp was stationed in the tiered lecture theater. He explained how over 45 tons of steel was brought into the building! Handsome Dan (who is actually a girl dog!) also joined in on the tours.

After the tours, we enjoyed each other’s company and met new people in the tent, which had been transformed into a bar, sushi buffet, and “living room.” The Whiffenpoofs graced us with an amazing performance.

The sun went down and the building was glowing from the inside…just like all of us. 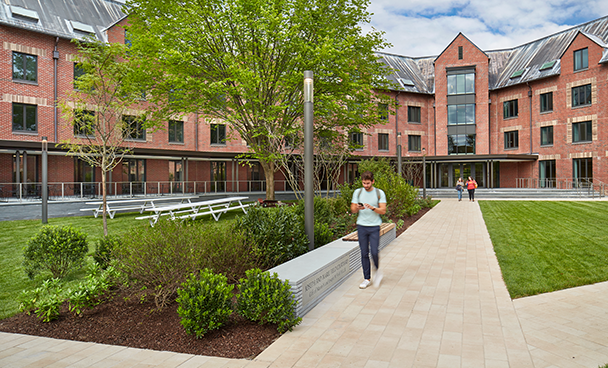