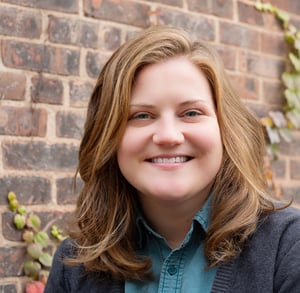 Laura Meade, RA, is inspired by stories told and untold. Being an architect allows her to translate these narratives- from autobiographies to fairy tales- into physical reality where they can be experienced by all.

Her path to architecture began at The Ohio State University, where she considered other mediums such as illustration, sculpture, and music composition as methods for translating abstract ideas into legible formations. Laura is an introspective person, and she started to identify the common themes of her most motivating interests (abstract relationships, narratives, tenor and form). An introductory architecture seminar course brought her aspirations into focus, and she went on to earn her bachelor’s degree. On one hand, architecture is a puzzle: there are rules, budgets, and challenging physical conditions to solve. On the other hand, it offers the freedom of artistic expression and the opportunity to illustrate contemporary human stories. Laura likes to use both hands in her work. She also likes to consider its position in a greater context, which led her to pursue a minor in City & Regional Planning, “zooming out” to study urban development trends and history.

After getting started at an award-winning architecture and design studio in Columbus for two years, Laura came to New Haven in 2014 to get her Master’s in Architecture from Yale University. While at Yale, Laura was a co-editor/contributor for Retrospecta 38: an annual journal of work produced by the Yale School of Architecture, and a design studio teaching fellow for first-year graduate students with Professor Eeva-Liisa Pelkonen. Laura went on to work at an internationally recognized firm in New Haven for five years, specializing in large-scale commercial and civic projects. She most notably helped usher in a new era of development along both American coastlines with two transit-centered placemaking projects- a 1M square foot trophy office tower in Boston, and the rail phase of a landmark transportation hub in San Francisco.

Throughout her career, Laura has been involved with local colleges and universities as an adjunct design studio teacher and guest critic.