For the summer solstice, the longest day of the year where the light is the brightest in the northern hemisphere, we’d like to share a thought project we recently completed.

Our work at Pirie is always about recognizing and sharing with our communities that the places we make are not static, but they are as active and engaged and evolving as any living thing.  In this thought project, we explored three aspects of this kind of place over time.

First, why do we sometimes experience déjà vu when arriving at a place for the first time? How do we recall details of a place we have never been? What connection do we have or are we making, even unconsciously?

Second, the energy we invest in making a place remains in that place long after our work is complete, and long after our clients are done occupying these places.  The sensible quality intentionality remains – for how long, no one really knows…BUT we do know that the greater the number of people who invest their intentional energy in a place, the longer the energy of that place remains, even if the form shifts or changes.

Third, what if we tried to map the evolution of form over time – of memory through place, of origins expressed with no beginning and no end? Would our personal stories of these places reveal the path there, or do they merely add to the great soup that we all created as we live and experience our lives in form and place?

WHAT REMAINS is our thought project exploring these ideas.  Each of the five stories describe the five drawings, not literally, but in feeling and sensation. Each is a place, all in one space over time.

We invite you to travel on this journey with us – enjoy!

“The way that people feel changes everything. Feelings are forces. They cause us to time travel. And to leave ourselves, to leave our bodies. I would be that kind of psychologist who says, 'You're absolutely right - there are monsters under the bed.”

“We shape our buildings; thereafter they shape us.”

“Energy cannot be created or destroyed, it can only be changed from one form to another.”

There is boundless creative force in the universe. It is channeled through consciousness and is experienced as intention. Intentions, when moved into form, create place. In this particular place, intentions collapse and expand, yet our five senses are too limited to perceive the nuanced distinctions.  If one were to imagine a spiral composed both of harmonic and turbulent moments this would come close; architecture is the action between these moments. Over time, the forces of intention keep going, coiling in and out of form, and this wave is time. This becomes the first place, the first point on the circle.  A point on a circle rolling forward drawing a wave.  When it returns to its position again and again it’s not to the same place.  Now imagine the point on a sphere. Our point, our moment, rolls out in every direction at once to every point. The space  between points is the place we occupy.

We always come back, but never in the same place. I imagine like most children, I lay on the ground gazing at the sky.  As my breath pushes my ribs gently into the earth, I wonder if a bit of me mixes with a bit of the soil as I breathe. My exploration expands to include the clouds above.  I feel the clouds and the space between the clouds, as well as the soil and the space between each speck expand and contract with me as I inhale and exhale.

At night, I begin to sleep on my stomach because sleeping on my back immediately takes me to places that I can understand by feel, but don’t know by sight. Am I out or am I in?  I visit ancient ruins and fall immediately asleep on the platform atop a pyramid. The steps to get there are steep, but not exhausting, yet I am fast asleep. Am I on my stomach or my back? I can’t tell.

Sitting on a bench in the main zocalo, I gaze across the place to see people walking, laughing, sitting, flirting. At once I feel like I have a bowling ball on my chest.  I can’t breathe. In a slight panic, I wonder what I have connected to.  My head turns to the right and I look to the guy sitting next to me, and I say: “Oh my God, it’s you!” Shocked, he says: “What?” My words tumble out: “Do you feel like you have a bowling ball on your chest?” He sighs and nods, saying that he walks every day of his life with this feeling.  It’s sadness or guilt or just stuff. Most days he says he can barely breathe. 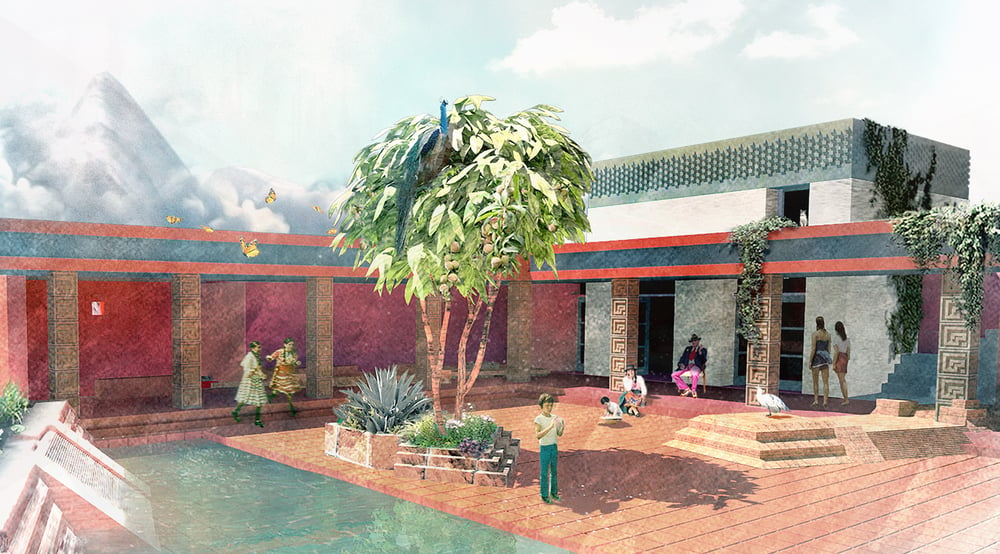 In first grade, I drew a courtyard house with a citrus tree in the center. There was always a bird in the tree. In second grade, I won a blue ribbon for a pastel version of this imagining. My mother signed me up for drawing lessons.

I forgot about the courtyard house with the citrus tree in the center until I had my own children. I remembered an urge to build this place worked its way into my imagination. It would include a wing for us, our children, our parents, and of course, friends and guests.  The entry to the courtyard needed to face south – not sure why, but it did.

I climb to the hilltop where an ancient city once stood. I had been there 15 years earlier, toured through with the older generation. The places they took me were what they recalled. This time, I arrive and sit at the base of the pepper tree. After a few moments, I turn and enter the main plaza, move up steps, and around a corner. I approach a courtyard that I know but have never seen before. That tree - I know it was citrus - even though it’s something else now. Guests would be welcomed into the courtyard through a southerly portal. Some would choose to pass by, heading instead for the main plaza. Others would enter and stay a while before deciding if they want to go further.

Sometimes I can feel the individual wrinkles of my brain as they rub against the inside of my skull. I know their shapes like a map.  They aren’t just random patterns formed by splitting cells; they are circuits on a motherboard according to some ineffable geometry. Like a long-ago city built on the axes of stars, they converge and diverge to some purpose the mind can no longer recall.  The energy crashes against me like a branch caught in violent rapids. I cannot merge with the flow or reach the shore. The connection is broken.

I lived in an ancient city on a mountain plateau.  There was an order that existed, but it was anathema. Whatever power had shaped the place was oblique to now – not even by those of us who directly inherited it. I want to carve a trench through. We had lost our ability to understand, provoked by more personal, momentary interests. When in conflict, it’s as if the forces are off their axes.

Now that is gone. What’s left is intention made in form: the order, the axis, the ancient geometry; clues to remember. The echoes of whatever energy flows past, unseen and unharnessed, waiting to be felt again. Old? New? Or both?

Depending on where I put my awareness, the place and its intentions are revealed. 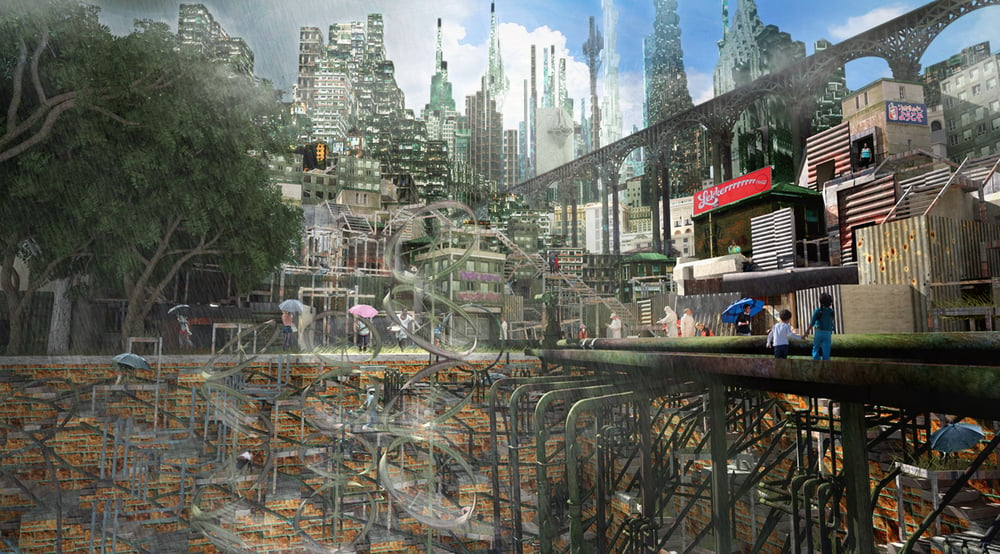 The well stones are older than anything, really slippery and steep. They say this place was completely built over, like a layer cake, every 56 years.

My sister was taller and able to take three steps at a time up the north block of the well. I can get to the top just after her if I start a little before she does. This season it is actually starting to even out, sort of…

I am climbing faster than I ever have.  I climbed up the pegs from box to plank. I pull myself up on a tray where the gardener was tending to seedlings. At the sight of me, he was so shocked that he screamed - and then I screamed - and I fell, but just into the tray below. My nose smashed into the dirt and a little seedling tickled my eyebrow. From this view I saw a single blade with a pill bug crawling up like it was going to work, while at the top, a fly landed and took off. Lines of ants and beetles were caravanning through the blades, so I got as low as I could to see what their streets were like. I looked up and saw our towers almost blended into theirs.

This made me think about the stories my great grandparents told about the re-building of this place every 56 years. They created an entirely new cityscape right on top of the old. Was that story literal, or a metaphor? Were they describing the collapse of time with place, or what remains of place that is no longer tied to the physical?

“One day during the gathering of a thunderstorm when the air was hot and still and a strange yellow light was over everything, something happened almost too deep for me to be able to relate. New dimensions revealed themselves in the visualization of the human form as a part of tree and rock rhythms and I turned full force to the medium at hand and the beloved Thing gave to me a power and abandon that I could not have had otherwise.”

This is the first place.

We always come back here, but never in the same place.

What remains? What comes of the energy that is invested in the relationship of place and people? Of intent and making? Of intangible and tangible?